Since June, Facebook has suspended me four times for 30 days each for posts they claim violate their community standards. The third suspension on September 12th, which approached farce, was rescinded in just over a day. Facebook has no procedures for contesting suspension. I’m posting the suspension notices here to show that there isn’t one thing objectionable about them except their politics. It is part of the censorship onslaught against Palestinian, Kashmiri, & Rohingya activists on social media whose accounts are being shut down right & left. When I updated my blog, I drew from my Facebook wall which automatically posts to my Twitter wall & compared it with my Twitter posts. Facebook not only has suspended me but without my knowing had deleted several posts, most of them dealing with Syria & Kashmir.

These are the offending posts: 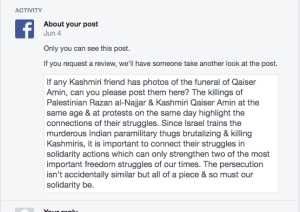 July 27 suspension notice:  this post which was in poetic form was written by a Muslim as a sardonic protest against the lynching & murder of an Indian Muslim by cow vigilantes. It’s unlikely the Facebook censor had any idea what it was about. 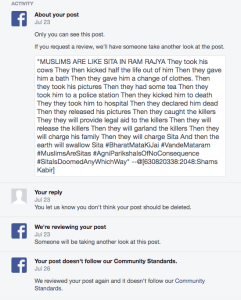 September 12 suspension notice which was rescinded:

September 18 suspension notice which I am presently enduring: 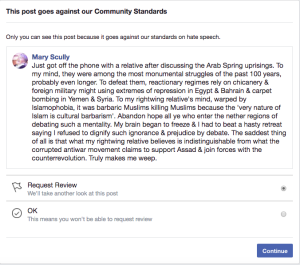