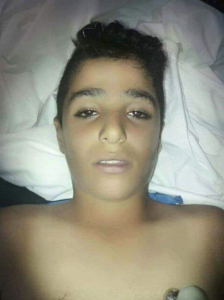 This is 15-year-old Mustafa Abdulhadi who was gunned down by an Israeli sniper at the Great Return March last Friday. It’s not accidental either in Palestine or Kashmir that so many of those killed, disabled, disfigured, arrested are young kids. The same phenomenon prevails in the US Black, Latino, & Native American communities & elsewhere in conditions of war, occupation, & genocide. Children represent rebellion & resistance to the oppressors & are directly targeted & terrorized, not accidentally killed.