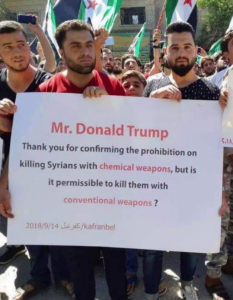 Some of the 1.5 million protesters against the Assad regime & against ground & aerial bombardment by Syria, Russia, & Iran: this placard also addresses the US role in the counterrevolution against the Syrian Arab Spring uprising which is present in the deployment of Turkish troops to Idlib. The US may not be bombing Idlib but it has dropped thousands of bombs every year in Syria since 2014. It continues to carpet bomb Afghanistan (including the Mother of all Bombs in 2017), Iraq, Yemen, Libya, & it bankrolls Israeli bombing of Gaza. Those who demand the US do humanitarian bombing in Syria have not an iota of human solidarity with those millions who have died at the hands of the US Pentagon.

Stop the bombing of Idlib. Demand the immediate, unconditional withdrawal of all foreign military forces from Syria.