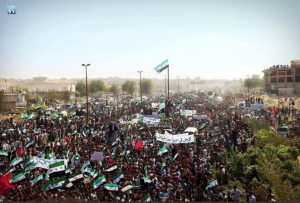 An estimated 1.5 million civilians in Idlib, Syria protested yesterday against Syrian, Iranian, & Russian ground & aerial bombardment. Their demands to stop the bombing are met with a resounding silence from the corrupted antiwar movement which supports Syrian & Russian bombing of civilians. This is one of the greatest betrayals in human history marking a political degeneration of monstrous proportions when erstwhile socialists & antiwar activists march lockstep with fascists, Islamophobes, & anti-Semites against such a momentous struggle for democracy & human freedom.

Our fullest solidarity with these protesters.