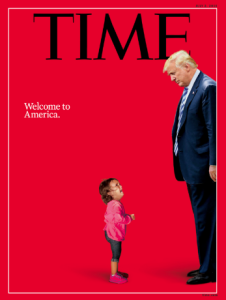 Morning news reports that the number of jailed refugee children increased 75-percent in the past couple years up to 13,000 children who entered through the southern US border with Mexico. It also reported that 500 of the over 2,500 children kidnapped from their parents & jailed are still not reunited with their parents despite a court order. This situation will not be addressed by US officials until there are massive protests for immigrant & refugee rights. The problem is that protests are not consistent & persistent enough. In that regard, we need take some lessons from Palestinian & Kashmiri resistance to occupation & genocide.

(Time magazine cover is a metaphor for US immigration & refugee policy, not an actual moment in time)