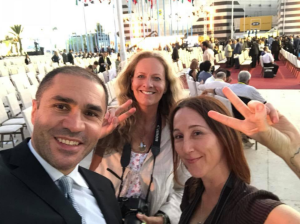 Assad official Fares Shehabi (who once called for the death of a 7-year-old girl) with Assad propagandists Eva Bartlett (who looks increasingly like The Joker) & Vanessa Beeley at the Damascus International Fair: while journalists around the world in war, occupation, & genocide zones are disappeared, incarcerated, tortured, & murdered, Bartlett & Beeley are embedded with the Syrian army & feted by their handlers from the Assad regime, including Shehabi & Assad advisor Bouthaina Shaaban. That is how we tell the difference between propagandists & journalists. They can make no pretensions to independence or journalistic integrity when they report what they are told to say by the Assad regime as news. Those who fall for such a transparent schtick only do so because of their own rightwing politics. Bartlett & Beeley are the Leni Riefenstahl & Ann Coulter of the Syrian counterrevolution.