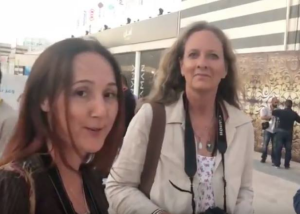 Fascists Eva Bartlett & Vanessa Beeley were oohing & aahing it up at the Damascus International Fair where they met with Assad official Fares Shehabi, one of their handlers in the Assad regime. The last time he met with them was for dinner in west Aleppo during the fall of Aleppo where they triumphally sucked down champagne as bombs fell on thousands of civilians in east Aleppo. They’re probably in Damascus for festivities tomorrow honoring the birthday of dictator Assad. They’re among his most fawning & shameless propagandists, yoked as they are by fascism, anti-Semitism, & Islamophobic paranoia. They rushed to Syria as the siege of Idlib began, hoping to be embedded up the ass of the Syrian army as it moves into Idlib just to tell their guppy squads that all those stories about Assad gassing the civilians of Idlib are just MSM lies, lies, lies.

What will happen to these two lowlifes when the counterrevolution in Syria is complete? Will they adopt Kim Jong-un of North Korea or Ortega of Nicaragua or Duterte of the Philippines to champion since they support them all? Or possibly Aung San Suu Kyi since they both support the Burmese genocidaires against the Rohingya people? Maybe they’ll move to Syria hoping for a regular job in the propaganda office of the Assad regime. Being embedded in an army tank loses its appeal after a while & these two girls aren’t getting any younger. Or maybe Bartlett will go back to playing the violin & Beeley will go back to sales or riding horses like they both did before their hatred of Muslims & Jews & their fascist politics made them ideal for serving as propagandists for the Assad dictatorship. In the long run, history will record them both with the same ignominy it does Leni Riefenstahl, Hitler’s propagandist, & Ann Coulter, the deranged rightwing pundit of US politics.

Video of Beavis & Butthead oohing & aahing at the fair: https://www.youtube.com/watch?v=L-Ayzcr3eA4

(Photo is screenshot from video)