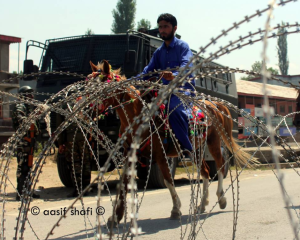 Razor wire has a history, most prominently in war. It has been commonly used in wars since WWI. But it was also used at prisons & mental hospitals to prevent escapes. Imagine that wire intended to inflict serious cuts on human beings was used against those with mental illness who were sane enough to want out of prison-like hospitals! They use razor wire to fence out war refugees from Syria, Afghanistan, & Iraq along the eastern borders of Europe; they top barricades with razor wire in North Africa to keep African refugees from crossing over. Israel uses razor wire on its apartheid wall & deranged xenophobes are calling for the barrier wall along the US border with Mexico to be constructed of razor wire to inflict maximum harm as part of Trump’s zero tolerance savagery. The primary purpose of barbed wire is to prevent safe passage by human beings. It is a scourge to human freedom & must be taken down wherever it is put up.