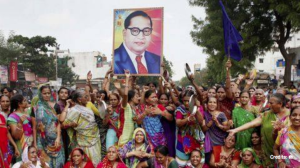 The Bombay High Court & other agencies of the Indian government are issuing directives to media & government officials to stop using the term “Dalit” which in the Indian caste system designates a person of the lowest, untouchable caste. The term was popularized by B.R. Ambedkar (1891-1956), himself a Dalit & an Indian scholar, jurist, principal architect of the Indian Constitution, economist. politician considered a founding father of India, & a social reformer who campaigned against the systematic & violent oppression of Dalits. Use of the term Dalit is similar to the term Black in the US which came out of the Black power, Black is beautiful movement of the late 1960s & early 1970s. The awkward use of the term African-American is almost certainly intended to distance Blacks from association with Black political power. It’s likely the move against the term Dalit & attempts to replace it with Scheduled Caste is also an attempt to neutralize its associations with resistance to oppression & the growing movement against caste oppression.

It’s a curious phenomenon all around the world that oppressed groups must grapple with their proper names–from what they prefer to be called formally to the hundreds of insulting terms intended to humiliate & demean them. The most prominent example of that now is the Rohingya struggle to be called by their proper name rather than Bengalis. Black Americans have had several proper name changes from Negro to Black to African American, with hundreds of racist terms. The same is true for Hispanics & Native Americans. Native American tribes have gone through a process of reclaiming their original tribal names since European colonizers renamed them precisely to take away their identity. This struggle over the names of oppressed castes is part of that phenomenon as are the hundreds of demeaning terms for women & girls. Those that have the problem with identity are the oppressors. It’s not certain how much of this is a psychological device to manage their own savageries but it is also a conscious political weapon to strip the oppressed of their identity & thus control them.

Indian activist Satyadeep Satya made this caustic observation about the move to eliminate the term Dalit from Indian media & government communications: “They want to ban the oppressed from being called the Oppressed because if oppression is called by its name, law & order, unity & integrity, harmony & peace…everything gets disturbed. After all, identifying oppression as oppression is the first step of resistance.”

One hopes that those who carry on banal disputations against identity politics will consider how similar their ideas are to oppressors who attempt to strip us of our proper names, our identity, & thus our dignity. The struggles of the oppressed over their identities are among the most important struggles in the world today.

(Photo is protesters holding up picture of B.R. Ambedkar, a champion of Dalit identity)