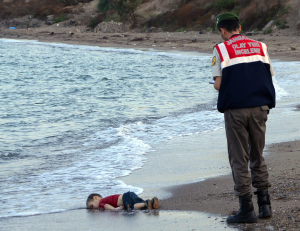 Three-year-old Alan Kurdi who washed up on the Turkish shore after a boat of Syrian refugees capsized on September 2nd, 2015: his five-year old brother Ghalib & mother Rehanna also drowned. This photo dramatized the crisis of Syrian refugees but three years later there is almost a complete news blackout on the refugee crises in the Mediterranean, Europe, the US, & Australia. It has been reported that conditions in Greek refugee camps are so squalid & overcrowded that children as young as ten are attempting suicide. In France, hundreds of refugee children are living on the streets subject to police brutality & beatings. Across Europe, thousands of unaccompanied children have gone missing from social service agencies, presumably ending up in the hands of traffickers. African refugees continue to drown on the route from North Africa to Spain & Italy & the EU continues to obstruct their safe passage. Nearly a million Rohingya refugees live in overcrowded camps subject to inclement weather & unable to assimilate into Bangladeshi society or move on to asylum elsewhere. In the US, hundreds of the 2,500 forcibly abducted children have still not been reunited with their parents.

The point of reposting this photo of little Alan is not to exploit his suffering but to again highlight the crises of immigrants & refugees & the imperative responsibility of demanding open borders whether refugees are fleeing war, occupation, genocide, or economic plunder.

Immigration is a human right. Asylum for refugees is international law. Open the damn borders.