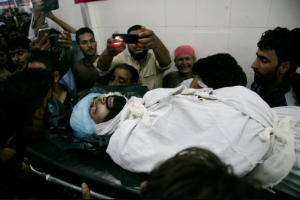 This is the burial service of Fayaz Ahmad Wani, a 30-year-old Kashmiri student & the youngest son of a farmer, who was gunned down on Monday by Indian occupying forces after one of their hunt to kill operations in Pulwama. He was getting ready for work when the operation began & remained indoors until it was over. He was not a part of any demonstrations but when he stepped out of the house & joined several friends from the area, soldiers directly fired live ammunition at them. He was taken to the hospital but could not be revived.

Since, in violation of international law, the Indian occupying army has impunity for such monstrous human rights crimes, no one will be charged or prosecuted for his death. May he Rest In Peace.

Go back India, go back.