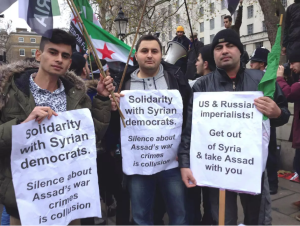 Both supporters & opponents of the Assad dictatorship anticipate a Guernica scenario in Idlib, Syria as the final defeat of the Syrian Arab Spring uprising by the counterrevolutionary alliance of Syria, Russia, Turkey, Iran, Hezbollah, & the over 60 member US-coalition. The 1937 bombing of Guernica, immortalized by Picasso, was requested by Francisco Franco & carried out by the German Luftwaffe & Italian air force. The complete bombing destruction of Guernica is the model for terror bombing civilians which Syria, Russia, & its other allies are preparing for Idlib where an estimated 3-million civilians live, most of them displaced by other military sieges in Syria.

Over the past few years there have been protests by the corrupt remnants of the US & UK antiwar movements demanding ‘Hands off North Korea’ & Hands off Iran’ but nary a peep of opposition to the actual massive bombing of civilians in Syria. Now they remain dead silent as Russia deploys thousands of troops to Idlib & preparations are being made for an all-out aerial assault. US “antiwar” activists trying to cover their asses for support to the Assad dictatorship now provincially argue that their responsibility is only US bombing, not that of Syria or Russia. Meanwhile, anti-Assad activists are beating the drums for US humanitarian military intervention & parsing imaginary distinctions between the US bombing bloodbaths in Iraq, Yemen, Libya, Afghanistan, & those in Syria.

There is an existential crisis in international, not just western, politics when erstwhile progressives are marching with fascists, Stalinists, Islamophobes, & anti-Semites in support of the bombing of civilians & a brutal, murderous regime & their opponents are marching with militarists & the US Pentagon. The international left has been moving to the right for at least 50 years, since the Vietnam War ended. Their endorsement of a genocidal war against the Syrian Arab Spring uprising signals their ultimate corruption & demise. From such ignominy it is not possible to regenerate.

Ultimately, both those who support & those who oppose Assad have looked to militarism & have shown themselves to be completely bankrupt politically. There is no regeneration of the left, there is no left any more when they have aligned themselves against one of the most important social & antiwar struggles of our times. It’s too late now for either side to come to their senses. They both must be replaced with new political forces who will not compromise an iota on militarism & the bombing of civilians. That is not pacifism but the fundamental principles of antiwar solidarity.

Photo is Syrian activists at protest in London.