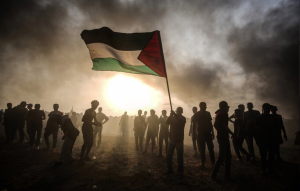 It’s important to understand the political character of Zionism, especially at a time when its liberal proponents are attempting to salvage it from the wreckage of discredited Exodus mythology. With the rise of Palestinian solidarity in the past 50 years & especially with the growth of BDS in the past 13 years, many anti-Zionist progressives, from liberal to radical, moved to the right & now argue the necessity for a Jewish-only state to address the persecution of Jews. It isn’t at all that the persecution of Jews has increased but that Palestinian resistance & solidarity are more threatening to Israel’s founding myths & thus to its legitimacy.

At its most basic, Zionism is the belief that Jews have a right to take over Palestine & expel the indigenous Palestinians to establish a Jewish-only state. The US-brokered Oslo Accords which legitimize Israeli occupation & expropriation as well as proposals for a bantustate (two-state) solution are fully a part of that perspective which is being exposed by the acceleration of Zionist settlements in the West Bank & of genocide.

Zionism is not a religious ideology rooted in the Old Testament or any fictitious Biblical claims to Palestine; the Bible is a religious text, not a land deed. Zionism is a secular ideology rooted in a belief in the superiority of Jews & the rejection of any kind of assimilation like modern nation-states entail. It is a rightwing ideology akin to nationalism which originated in the late 19th century in response to the persecution of Jews in Europe. It emerged in an era when the savageries of European colonialism in Asia, Africa, the Americas, & Pacific were starting to be addressed by progressive political forces. Dividing up the world & competing for plunder was the fundamental conflict between nations which led to the first World War. The socialists & progressives of the day believed racism & colonialism should be intransigently fought & historically vanquished or they would destroy humanity. In this historic combat against colonialism, Zionist ideologues, based on their privileged class, chose to side with colonialism, adopted its methods & perspectives to set up a Jewish-only state, & rejected the broader struggle against racism & colonialism.

There have always been strong objections by progressive Jews to the rightwing proposals of Zionists. Some of the most powerful writings & critiques are by Jews who detested the stinking elitism, wanted to ally the struggle against antisemitism to the struggle against racism & colonialism, & considered it treachery to ally with the forces of reaction. Many of them died in the holocaust which Zionists exploited to peddle their nefarious scheme.

It’s important to distinguish among Zionists, between ideologues who accept any measure of barbarism against Palestinians for a Jewish-only state & those who are growing alarmed by the scope of Israeli genocide against Palestinians. We cannot write off the possibility that the latter can be won to the perspective of a secular, democratic state where Palestinians & Jews will live as equals, even as brothers & sisters. Demonizing them or treating them as pariahs does not further that campaign any more than making concessions to their elitism or racism against Palestinians.

You cannot reason with racism. As the US civil rights movement demonstrated, it is political power that ends the violence, silences the haters, & persuades the equivocators. Standing unequivocally with Palestinians through rallies, educational forums, demanding no military or other aid to Israel, building BDS, helps them build political power against colonialism, apartheid, genocide. Palestinian political power is the only solution for both Palestinians & Israeli Jews.