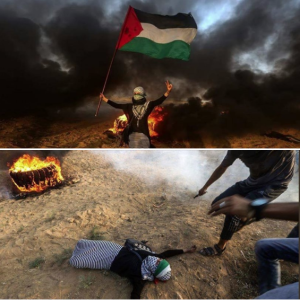 The top photo is a Palestinian girl raising the Palestinian flag at the Great Return March last Friday; the bottom photo is the same young girl after being shot by an Israeli sniper. There is no report yet on her condition. A female medic named Shorouq Abu Mosameh who a sniper shot in the chest has died from her wound. Gaza’s health minister reports that Israeli snipers injured 180 unarmed protesters at the Great Return March on Friday, including a 10-year-old child & 59 others rushed to hospitals for serious injuries. The others were treated in field hospitals. Overall, 16 children were injured. Hundreds of others suffered tear gas inhalation. In the entire month of August, Israeli snipers killed 17 Palestinian protesters at the Great Return March, including four children, as well as one protesting settlements in the occupied West Bank & one Palestinian citizen of Israel.

Zionists have the official narrative so tied up that this kind of barbarism doesn’t even make the news & Palestinians continue to be depicted as terrorists, thus allowing genocide to accelerate at a ferocious pace. One of the primary reasons for the censorship binge on social media is to make sure the prevailing narrative is not contradicted by images like this & by the truth. As the genocide against Palestinians accelerates, so must our campaigns in their defense, particularly public protests & building the economic & cultural boycott of Israel.