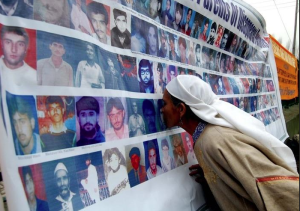 Today is International Day of the Disappeared 2018. Nearly 50 countries practice forcible disappearance & in the past several decades tens of thousands have been been abducted, tortured, murdered, dumped in mass graves, or stashed in secret prisons. It is a monstrous & deeply personal crime because there can be no resolution of the loss & grief until family members know what happened to their beloved. Going back as far as the thousands disappeared by the Franco regime in Spain during the 1930s & spreading across the globe during war, occupation, & genocide, including the Rohingya genocide in Burma, these photo collages have become a permanent form of protest & remembrance demanding regimes on every continent end forcible disappearance & make an accounting for the whereabouts of those disappeared.

This photo collage includes some of the nearly 10,000 Kashmiris, young & old, disappeared since 1989. Parveena Ahangar, Parvez Imroz, Khurram Parvez, & other Kashmiri activists play a leading role internationally in the political battles against forcible disappearance & we should take a moment to honor them for their work.