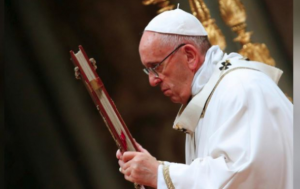 Pope Francis was just accused by an archbishop & former top Vatican official of covering up sex abuse in the Catholic Church for years, particularly that of serial predator US Cardinal Theodore McCarrick who was just forced to resign. The archbishop who served as an apostolic nuncio (papal ambassador) in Washington DC detailed his accusations in an 11-page letter published in an American Catholic newspaper & other media where he demanded the pope’s resignation. When asked by reporters about the accusations, Francis did the Vatican quick-step, a dodge & bob move that he is becoming so noted for when he isn’t doing his humble pie routine. The Attorney General of Pennsylvania also just reported that the cover-up of 301 priest sexual abusers in that state goes all the way to the Vatican.

Whilst in Ireland, Francis had the utter temerity to ask for forgiveness for prelate child sexual assault. What our man does not apparently understand is that he is in no position to ask for forgiveness for such monstrous crimes against children when he has done nothing worthy to address this crisis of criminality among priests & the highest prelates in the church. Before we ever get to the question of forgiveness, there is a matter of justice, of the Vatican stopping the cover-ups & turning its molesters over to authorities for prosecution. If the Vatican ever wants to clean up this mess of pedophilia, it will have to come to terms with the misogyny that has governed its attitude & policies toward women for decades, including the role of women in the church & its opposition to reproductive rights for women.

(Photo of Francis by Tony Gentile/Reuters)