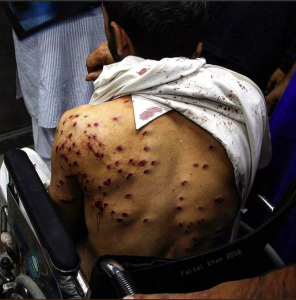 The photo of this pellet gun victim in Kashmir isn’t dated but it could be any time till the present from 2010 when the government of Omar Abdullah began using them against what Indian media called ‘violent mobs’ but what we know were unarmed civilian protesters. Abdullah is the guy touring US campuses now speaking on solutions for Kashmir & being confronted by Kashmiri activists for this criminality.

An Indian nationalist who wandered on to my friend’s list through a blunderous misunderstanding just mocked the Kashmiri freedom struggle. He had to go. Even if you don’t understand the Kashmiri struggle against colonialism, occupation, genocide, when you come to my wall you listen to what they say & learn from them about one of the most important freedom struggles of our times. A victory for Kashmiris is of international importance & would change the balance of political forces in the world to the advantage of the oppressed everywhere. You don’t have to get that. But if you dare to mock it, you’re toast. Have a good life. But scram. Because if you can ignore or justify this kind of criminality against unarmed protesters, we won’t be moving through life together. We have nothing in common.