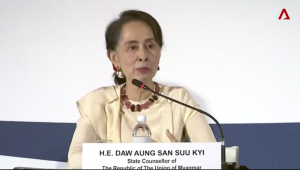 There is a tiny little flap about Aung San Suu Kyi delivering the keynote address at the 43rd Singapore Lecture on the subject “Myanmar’s Democratic Transition: Challenges & Way Forward.” In fact, judging from previous speakers like Chinese president Xi Jinping, Indian prime minister Modi, Saudi prince Sultan bin Abdul Aziz Al-Saud, & German chancellor Angela Merkel, Burmese genocidaire Suu Kyi is perfectly suited as the keynote speaker. Genocide against the Rohingya people is of a piece with Chinese genocide of the Uyghur people, India’s occupation of Kashmir, the Saudi aerial bombardment of Yemen, & the German denial of refugee status to thousands fleeing war in Syria, Iraq, & Afghanistan. Who better than a genocidaire to complete the rogue’s gallery of speakers?

The Singapore Lecture is considered a prestigious forum with an audience of about 1,000 ambassadors resident in Singapore; senior government officials; business leaders; academics; carefully selected students, & members of the media. Judging from the applause Suu Kyi received, the insipid questions she was asked, the sycophantic praise & honorifics she was larded with, & the laughter her dull wit evoked, these were not people the least disturbed by that little matter of genocide.

Suu Kyi, who spoke with smug hauteur, referred in her speech to the Rohingya as “displaced persons” & suggested they were terrorists. Only one man in the audience humbly challenged her on the genocide but she played stupid as if she had no idea what the hell he was evasively talking about & her audience had no intention of making her uncomfortable with expressions of disbelief or contempt. The point of this blah blah blah rhetorical moment was drumming up business for neoliberal investment in Burma despite genocide. One student, ignoring her open collusion with the generals, asked about her lack of control over the military. Suu Kyi, pouring on the fatal charm that only a genocidaire can, answered that her government’s relationship with the military was “not that bad” & that of the three military men on her cabinet “all are rather sweet.” (We’ll put aside that her cabinet is comprised mostly of retired or current military officers.) Oh how the audience of ass-kissers tittered at her bon mot, as if those sweet generals hadn’t just participated in a monstrous genocide of nearly a million Rohingyas. One could find more political vibrancy at a gathering of the walking dead in the tenth circle of hell than in the audience at the Singapore Lecture. Again, who better than a genocidaire to complete the rogue’s gallery of keynote speakers talking to a room full of dead people?