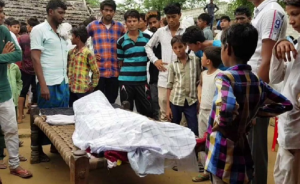 Last Friday (July 20th),  a 28-year-old Indian Muslim man named Akbar Khan & a friend were returning to their home village leading two cows they had purchased. In the town of Alwar (about 150 kilometers from New Delhi in the state of Rajasthan), they were attacked by a group of vigilantes who accused them of cattle smuggling. The friend managed to escape but Khan was brutally beaten & lynched. The issue, of course, was not the protection of cows or smuggling but the escalating, unbridled aggression against Muslims & Dalits in India under the pretext of cattle smuggling or child abduction.

Although Khan was in serious condition, police kept him in custody for at least three hours before taking him to hospital. They arranged for vehicles to transport the two cows to shelter, stopped in at the police station where some reports claim Khan was again beaten, stopped at a nearby stall for tea, & were witnessed assaulting Mr. Khan in the police vehicle–all before taking him for emergency medical care. When he arrived at the hospital profusely bleeding, he was declared dead. Although some reports claim there were 8 to 10 vigilantes involved, police have arrested only three men & will not likely charge their own personnel with assault or criminal negligence in getting Mr. Khan care. The officers involved were later given a slap on the wrist (one was suspended & three put on traffic duty) after their superiors found “The delay to take him (Khan) to a hospital was not intentional but a miscalculation. The cops could not prioritize their line of action, which lead to this prima facie lapse.” The doctor examining Mr. Khan’s body at the hospital reported that, based on photographs, his condition after rescue was far less critical & less bruised than the dead body delivered to him by the police.

This complicity between anti-Muslim vigilantes & authorities is what leads activist Bobby Kunhu to say: “Why do I have a bad gut feeling the 2002 Gujarat model may be unleashed across as many parts of India as possible before 2019?” The Gujarat model he refers to is the 2002 pogroms against Muslims in the state of Gujarat presided over by then Chief Minister Narendra Modi in collusion with state government & law enforcement. In the course of a few weeks (although the violence went on for over a year), over 2,000–the majority Muslims–were killed, thousands were injured, hundreds were disappeared, property was vandalized. Several scholarly investigations accused the authorities of premeditation & complicity in the vigilante violence.

Although the Indian government is not properly reporting incidents of cow vigilantism & media reports are confused, they do report they are increasing dramatically in several Indian states & most of the victims are Muslims. Mob incidents are also increasing against oppressed castes & after rumors of child abduction. As one member of the Indian parliament said, at many places in India,’it’s safer to be a cow than a Muslim’

Photo is body of Akbar Khan. May he Rest In Peace while his family & supporters demand justice for his death.