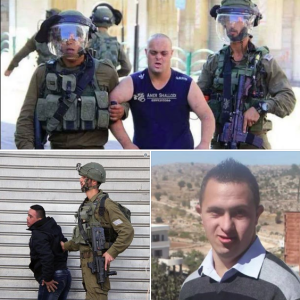 Facebook shut down the account of Palestinian Mohammed Selmy for 24 hours because he correctly said Israeli soldiers in Hebron arrested & tortured a young man with Down Syndrome. They broke Mahmoud Zayed’s wrist while he was in custody. This is not the first incident of Israeli soldiers assaulting men with Down Syndrome. In December 2017, 29-year-old Mohamed al-Tawil was arrested & beaten in Hebron. In July 2016, 23-year-old Arif Jaradat was shot & killed by Israeli troops in his West Bank village of Sair.

We should be sensitive in reporting these incidents since the international Self Advocacy movement of those with learning disabilities asserts & fights for the right & ability of those with learning limitations to participate fully in social & political life. It is important to refer to them as men rather than boys unless they are in fact minors. They may have special needs but they understand oppression & certainly military occupation as well as others. This is an excellent article on the 2016 execution of Arif Jaradat by Gideon Levy in Haaretz: https://www.haaretz.com/israel-news/.premium-soldiers-fled-after-shooting-palestinian-with-down-syndrome-1.5403791