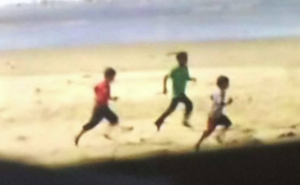 It’s deplorable but not surprising that the Israeli education minister wants Israeli bombers to drop bombs on the heads of Palestinian kids flying kites. That’s actually Israeli policy. Even the UN reported that Israel directly targeted children in its 2014 seven-week bombing siege of Gaza. Of the 2,200 Palestinians killed, over 500 were children. Thousands were injured, some with permanent disabilities. That doesn’t count the tens of thousands traumatized, terrorized & made homeless. The most notorious incident was on July 9th, 2014 when Israeli bombers chased down four little boys playing soccer on the beach & killed them all.

Now that Israeli officials are emboldened enough to state their genocidal intentions against Palestinian kids, it is for so-called left Zionists to decide whether or not they want to be part of that. Or whether justice stands with Palestinian self-determination against Zionist terrorism & genocide.