Those who listened say Sanders didn’t make such a strong showing last night in his debate with Biden who is in the early stages of dementia. Was it in deference to the illness or so that when Biden sweeps the nomination it won’t be so awkward for Sanders to endorse him? 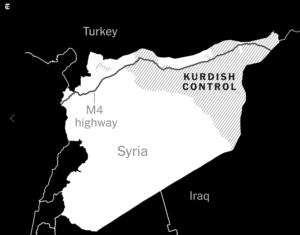 If we’re confused by Turkey’s conduct in Syria, it’s because it is confusing. Two weeks ago, they were bombing Syrian targets; today they’re allied with Syria’s chief ally Russia in joint patrols on the M4, a key highway in northern Syria. The M4 which runs through northern Syria from the Mediterranean to the Iraq border has long been a war zone. Some sections of it are under Syrian regime control, other sections are under rebel control. It’s important to Turkey as a way to control the Turkey-Syria border–not just against the movement of refugees fleeing scorched earth bombing but to manage the smuggling of arms, drugs, goods, & the movement of militia groups. Since October 2019, Turkish forces used it to facilitate access to the semi-autonomous region of Rojava in their siege against the Kurds. US forces used it to move caravans of flat bed trucks with equipment from a US base dismantled to facilitate the movement of Turkish troops against Rojava & allow the incursion of Russian & Syrian troops. That should answer which side the US is on in Syria. It should also answer which side Turkey is on.

Russian officials issued a statement that ‘the patrol route on M4 was shortened when jihadi rebels used women & children to block the way’. Actually, Syrian opposition activists are protesting & blocking the highway to prevent the movement of Russian troops & materiel used against the Syrian Arab Spring. Given that they are surrounded by Syrian, Iranian, & Russian troops & besieged by Syrian & Russian bombers, it is extremely courageous for Syrian partisans of the revolution to block the M4. Our fullest solidarity with them.

Did ISIS really issue a travel advisory to its members not to travel in Europe? All Europeans, & for that matter the rest of us, second such social distancing from a death cult.

It’s totally injustice with the youth who are preparing for competitive exams and are not able to join their coaching classes due to the outbreak of COVID19 as Government has notified an order to close all institutions till 31st of March. It is not possible for people to study at home without an Internet connection.

It is need of the hour to fight COVID19 and we welcome government’s decision to close all education institutions till 31st March but at the same time we need to compete with rest of the world for which we have to study at home by our own efforts with the help of internet. So we request Government to restore 4g internet without any further delay.”

The first time I heard the term ‘triage’ was during the 1974 famine in Ethiopia when overfed professors at Harvard proposed it as a solution to the famine. They publicly & unabashedly claimed the most merciful solution to the famine was to let hundreds of thousands starve to death since their prospects for life were grim if they survived. I gave a forum on the theory as applied to the famine & recall attempting to shred the psychopathy of it, so closely aligned with eugenics & the Nazi holocausts in its racism, supremacism, elitism, & genocide.

Triage is originally a French battlefield concept from World War l where they divided wounded soldiers into three groups: those who would survive without care; those who would die despite care; & those who might survive with care. The short-staffed medics would treat the third group first. It was an emergency measure & had nothing in common with eugenics. The Nazi holocausts of Jews, Roma, Slavs, the disabled, homosexuals, Jehovah’s Witnesses, & others were rooted in eugenics. The Harvard professors, in their stinking elitism & racism, combined eugenics & fascism with triage to address famine in Africa. Now in the coronavirus epidemic we see triage being used by politicians & medical systems to justify ‘culling the herd’ of the elderly. They should not persuade us, whether we are young or old, to accept a eugenical mind set when it comes to addressing this or any health crisis. Eugenicists should not persuade us that some lives are more worthy than others. Modern capitalism has more than sufficient resources to address the medical needs of all if it prioritizes healthcare instead of privatizing it under neoliberal economic policy & making it a privilege only available to the rich.

As medical care stands today in the barbaric phase of capitalism, healthcare is not prioritized & medical policies will be based in eugenics. If most elderly were in a line waiting for treatment for coronavirus, it is likely many would allow younger people to be treated first. We just don’t want out lives to be considered dispensable as a policy. Many of us will go to our graves fighting tooth & nail against the concepts of eugenics. For that alone, our lives are worth living.

“Coughing in public these days is like shouting Allah hu Akabr”. 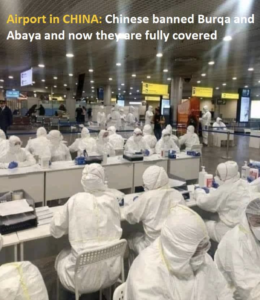 “Mexico is now asking Trump to hurry up with the wall. 😀