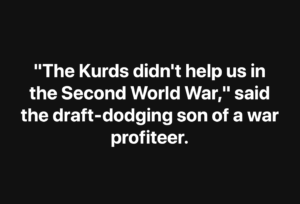 There are about 35 million Kurds divided between Iran, Iraq, Turkey & Syria in a region they call Kurdistan. At least 14 million Kurds live in Turkey (20% of Turkey’s population) subject to extreme repression. In its onslaught against Syrian Kurds, is Turkey entirely certain it can trust its rear guard? There are already Kurds protesting in Turkey with police using water cannons against them. May those Turks standing in solidarity against war only grow in numbers.

Activists from Azad Kashmir are in their fifth day of a sit-in protest at the Line of Control to #StandWithKashmir.

In their fascist raptures over the Turkish onslaught against Syrian Kurds, Assadists are dragging out stories & distorted histories of Kurdish collusion with Israel & Mossad. One hopes that human rights activists can distinguish between the betrayals of corrupt leadership & the just demands of an oppressed people. Just as we want the war & human rights crimes of the US, Indian, European, & other governments distinguished from their citizens who oppose them. It is important to understand history & misguided alliances. It is unwise to trust ‘history’ as presented by those who celebrate the slaughter of civilians by calling them terrorists. 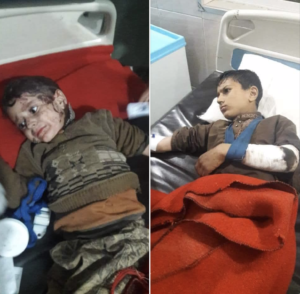 In an attempt to provoke Pakistan, the Indian Army is shelling civilians in Neelum Valley, a region in Pakistan-controlled Azad Kashmir near the Line of Control. An 8-year-old boy was killed & six other civilians have been injured.

Demand the immediate, unconditional withdrawal of all Indian forces from Kashmir.

Nothing is more thrilling than to see the massive protests in Iraq against government corruption & US military occupation. What Iraqis continue to suffer since 1990–nearly 30 years–is one of the worst genocides of our times. We stand with them & that will only mean anything if we commit to rebuilding a principled international antiwar movement.

Not being a military strategist nor a Nostradamus, I don’t know how Turkey’s onslaught against Kurds will play out for the resurgence of ISIS or how the onslaught will be to the Syrian regime’s military advantage. It certainly doesn’t clarify US military strategy in Syria which is a mass of seeming contradictions, improvisations, & secrecy. What is clear is the quagmire character of all foreign intervention in Syria & the fascistic character of Assadism.

“We will open the gates & send 3.6 million refugees your way.”

–Erdogan threatened to send millions of Syrian refugees to Europe in violation of its 2015 financial agreement with the EU if the EU labels Turkey’s military incursion an occupation. He wants the northeast Syrian territory where Kurds live as a place to forcibly return those refugees to Syria. 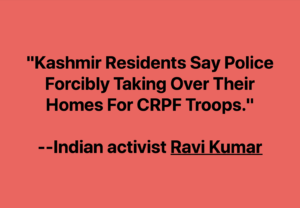 Anyone who goes to a genocide zone for vacation has to have a few screws loose. But the likelihood is that the ‘tourists’ attracted to Kashmir now will be Hindutva land speculators, Indian businesses & corporations looking to cash in on the plunder & economic exploitation, the same kind of unsavory grubbers who flooded into the former Soviet Union after its collapse.