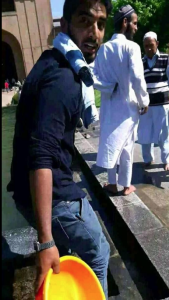 This is a photo of Qaiser Amin cleaning the blood from the Jamia Mosque in Srinagar last Friday after Indian occupying forces shot up the mosque, injuring over 100 people. Today he was run over & killed today by an army jeep. He was a good & decent man. The photos of the incident today show that he died gruesomely.

This is a moving album of photos of Razan Al-Najjar, the young Palestinian nurse shot in the heart by an Israeli sniper yesterday. The photos show her engaged in tending the injured at the Great Return March.

Thank you to Akrama Mitwali for these photos.

This is an extraordinary video poem by a young Palestinian. So powerful, so moving, so creative. 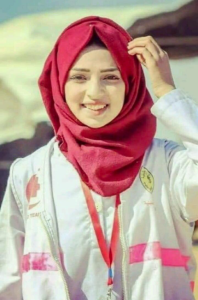 Of all the affinities between Palestinians & Kashmiris, none is more wrenching than the constant loss & grieving for young people killed by occupation forces. Thousands have been killed & in the most unspeakable ways, like the young Kashmiri man run over by an army jeep today. This is 21-year-old Razan Al-Najjar, a Palestinian nurse working with the medical staff at the Great Return March. Yesterday she was shot in the neck by an Israeli sniper as she was helping an injured peaceful protester, though she was wearing a clearly marked medical vest. It was an execution.

Palestinians are remarkable for their courage & tenacity but they are human. They are not robotic automatons who follow orders like lemmings as portrayed by media. Death from occupation is constant but in the past several weeks alone they have lost over a hundred. The grief & loss must be overwhelming. One Palestinian man said her death has broken their hearts, that they feel not just saddened but paralyzed at her loss. The purpose of solidarity is to stand with them, especially at this time, though there is never a time when they are not burying their young. We surely cannot give in to feeling helpless against what seems the insuperable power of Israel & its international backers. Palestinians need us at this moment more than ever. Rallies & protests remain imperative. But those who cannot participate in rallies can honor & build the economic & cultural boycott of Israel for apartheid & genocide against the Palestinian people. Check every damn label on every product you buy to make sure its country of origin is not Israel. More than anything, think of yourself as an evangelist for the cause of Palestinian justice. Their struggle is a touchstone of our times. Their victory, which is possible, would change the course of human history for suffering humanity. Allow no one to ever vilify them as terrorists when their freedom struggle is of the greatest importance to all humanity.

May our dear sister Razan Rest In Peace. Our sincere condolences to her family, her friends, & to all Palestinians for this deeply tragic loss.

Does anyone know of a good analysis of the Chinese occupation of Tibet from a human rights perspective? Michael Parenti has written a popular & influential defense of the occupation which is nothing but Stalinist apologetics. You have to be either a Stalinist or a babe in the woods to think China had progressive intent in forcibly occupying Tibet. At least any more progressive intent than its treatment of Uyghurs or than the former USSR had in occupying Afghanistan. If you know of any writers or articles, please let me know. 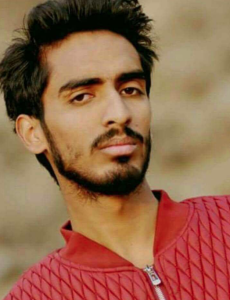 This is 21-year-old Qaiser Amin, the young man gruesomely run over by an Indian army jeep while protesting after Friday prayers today. In videos of the protest, army jeeps were barreling at top speed through crowds of protesters heedless of possible injuries or deaths. Young Qaiser, who was a student, was preceded in death by both parents but leaves two grieving sisters. We should take a moment to honor him for his contribution not just to Kashmiri freedom but to human freedom. May he Rest In Peace.

(Photo of Qaiser via Trending Kashmir) 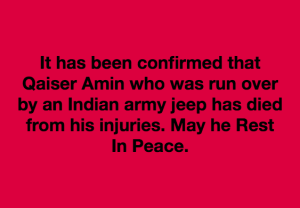 I don’t want this excellent video by Basharat Amin on military use of sexual violence in Kashmir to get lost in the shuffle; it’s very powerful:

European friends, I want to donate to the Rohingya charity but it asks for money in euro with this format: 00,00 euro. Does that mean 43,99 as in 43 euro & 99 cents or does it mean 4,399 euro which would overdraw my account by several thousand? A poor girl can’t take chances.