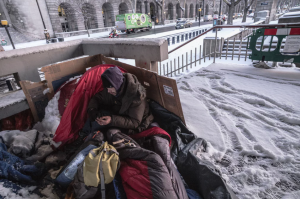 Homeless in London: this man on the Thames Embankment is sleeping rough in subzero temperatures of -3C (26F). The reported homeless rate in England of 4,751 has increased 73% in the last three years (up 169% since 2010) though it does not approximate the 55,000 homeless just in Los Angeles county, California. Meanwhile, we’re supposed to be enchanted by the pending wedding of Harry Windsor the mooch which will cost taxpayers more than $30 million. It wouldn’t take even a fraction of that to provide public housing for 4,751 people.

(Photo by Sean Smith for the Guardian) 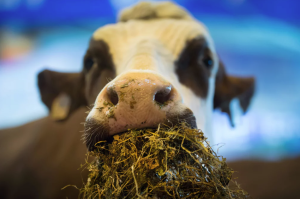 Facing abandonment & public humiliation, finally grasping what a laughing stock he is to most of the human race, & hopefully facing incarceration, Trump was found grazing on the back lawn of the White House. Security guards at first mistook him for a deranged cow stuffing his face with manure but then realized most bovines have considerably more dignity than the president of the United States.

Someone who opposes the Assad dictatorship but harbors inexplicable delusions about the character of the US Pentagon, seeing in it a potential for humanitarian military interventions, has just claimed that antiwar activists who oppose US intervention in Syria “have a lot of blood on their hands.” It’s a militarist frame of mind that substitutes power politics for massive, public, relentless opposition to war, occupation, genocide. Coincidental that fascist Eva Bartlett also once accused me of that for opposing Assad & Syrian & Russian bombing of civilians?

Those sustaining war, occupation, persecution, genocide have a right to defend themselves by any means necessary, including arming themselves. But when, as in Syria, small paramilitary groups are up against nearly 70 of the most powerful & barbaric military forces in the world (or as in Kashmir & Burma, where small badly armed & poorly trained groups face overwhelming military force), it is insufficient to rely on militarism to withstand the onslaught. How does the accuser believe the US & Saudis who are bombing Yemen to smithereens or the US which dropped the Mother of All Bombs in Afghanistan & turned Mosul & Raqqa into dead zones will transubstantiate into freedom fighters? That would be the very essence of magical thinking & political idiocy.

There is no militarist end run around regrouping antiwar forces around the world to stand with the Syrian people & demand the immediate cessation of Syrian, Russian, & US coalition bombing of civilians & the immediate, unconditional withdrawal of all foreign military forces & operatives from Syria.

Fake news alert: China reports that extreme poverty has gone from near-universal to near-extinct in China measured by the World Bank poverty standard of US$1.90 a day ($883.50 a year). A minimum wage worker in the US earns a lot more than $1.90 per day & only a fool would claim they do not live in extreme poverty. When well-paid statisticians singing for their supper measure poverty, it’s a very different metric than those who live poverty. 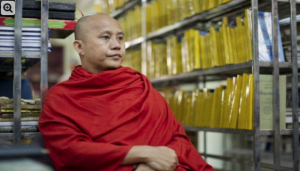 A Facebook spokesperson announced that they have removed the page of Wirathu, the rabid nationalist Buddhist monk in Burma who leads the anti-Rohingya campaign, for “promoting hatred & violence against others” in violation of their community standards. FB did not do this because they object to his vituperations but to legitimize censorship on social media which they & Twitter engage in constantly on behalf of reactionary regimes. There is a group of anti-Assad activists dedicated to getting Assadists banned from FB by dogging & reporting their posts. Nothing could be more shortsighted whilst there is major & constant censorship of Rohingya, Kashmiri, Palestinian, & Syrian activists, not to mention FB cooperation with authorities in places like China, the US, & elsewhere.

There’s a disturbing irony about removing the wall of the demagogue Wirathu when those of Aung San Suu Kyi & General Min Aung Hlaing, the chief architects of the Rohingya genocide, are allowed to stand.

Censorship is never directed at the power elite but at freedom activists. Tossing in a creep like Wirathu once in a while is to legitimize censorship not unlike how the Nobel Peace Prize operates by every once in a while throwing in someone like Martin Luther King or Malala Yousafzai with all the war criminals. The best interests of the Rohingya, Palestinians, Kashmiris, Syrians, & others is served by opposing censorship. One could say without exaggeration, that it is politically reckless & naive to in any way facilitate censorship on social media. If it were not for social media, we would know very little about those freedom struggles since media imposes news blackouts on most of the important struggles going on in this world precisely to prevent the development of international solidarity. It might also be added that it is extremely important to know exactly what kind of rubbish these rightwing & fascist propagandists are spewing so they can be cogently refuted before they do any more damage to the freedom struggles than they already have.

Barring Wirathu from FB is not a substitute for bringing him to justice in an international tribunal for inciting genocide against the Rohingya people.

(Photo is Wirathu from AFP)