Sincerely sorry that Louisiana Republican Steve Scalise got so seriously injured at the ballpark shootout last month. Good thing the gunman was a white guy from the American midwest & not a brown guy from the Middle East so Scalise doesn’t recover & come back an even more rabid white supremacist & even more xenophobic about refugees.

Good thing too we pay for congressmen to get such a full spectrum health insurance plan so money is no object for his treatment & recovery. But what do you bet he comes back still gung-ho to dismantle Obamacare? Let’s face it, that kind of guy just can’t identify with the rest of us. Still, we aren’t small like him & wish him a speedy recovery.

Amy Klobuchar, the Democratic Party Senator from Minnesota, is on the news denouncing Trump for his defiance of democratic norms. She was the county attorney who prosecuted me & others for peacefully protesting against experimentation on live animals in 2000. Democracy is a flexible concept in her mind, a political expedience not applicable to protesters.

German police are using water cannons against G-20 protesters. German protesters need to straighten that out fast since it has again become the norm there & will soon be the norm elsewhere–like in Nazi Germany, apartheid South Africa, against the US civil rights movement, & Kashmir under occupation. Water cannons are assault weapons & their use must be met with maximum opposition by those who believe in the democratic right of protest.

So much for any lingering illusions about Angela Merkel.

It’s not good to wish evil on anyone, but I’m thinking a mild attack of locusts around the White House, something short of a plague, might not be a bad idea. Could be enough to send him back to Mar-a-Largo for good.

It may look like it, but I don’t really go around the world looking for human misery to poke my nose into. Desolation & jeremiads are all the rage now because the world is in a hell of a mess & some just can’t see past the oppression & defeats to the possibilities for change. The possibilities are expressed by those who fight against all odds to end war, occupation, & inequality & don’t have time to cry in their beer that all is lost.

We do have to take a hard look at why, despite massive mobilizations on every continent, there are more defeats than triumphs. That’s a contentious process of debate & not an easy one receptive to the glib. But if you start from misanthropy & contempt for humanity’s possibilities, you end up at that place marked “abandon hope, all ye who enter here.” That place is the gates of hell & humanity is worth so much more than that.

Police authorities in Arakan (Rakhine) state now claim the police escort of seven to eight officers that took seven Rohingya men from a concentration camp into Sittwe was actually only one unarmed rookie officer. After he drove them into a neighborhood where in apartheid-style Rohingya are not allowed to enter without permission, he panicked & ran off when they were attacked by a nationalist Buddhist mob.

There isn’t one thing credible about that claim & yet Reuters & other news agencies are reporting it as the gospel truth even though Rohingya media sources contradict it.

Even if you accept the communal violence version of ethnic cleansing, why would the Arakan police, in a situation of such polarization, escort seven Rohingya men with one unarmed rookie? Why would he take them to an area where they were in danger if he was in no position to protect them?

Does anyone else think this incident smacks of a setup? Will the Rohingya victims who survived be allowed to tell their version of what happened? 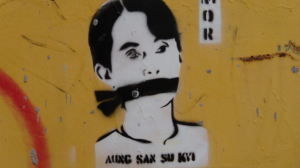 The NY Times coverage of the Rohingya struggle against ethnic cleansing is appalling & dishonest. But then most media coverage is an absolute disgrace if not a mockery of journalism. If it weren’t for social media & Rohingya activists we wouldn’t have a clue about what’s happening & would think it was just that Muslims & Buddhists in Arakan (Rakhine) state can’t work out their differences amicably because Muslims are so damn unreasonable wherever they are persecuted.

Last Tuesday, seven Rohingya men were taken by police escort from Dar Paing, a concentration camp where they are forcibly confined, into nearby Sittwe, the capital of Arakan state. From this point on, media can’t tell its ass from its elbow about what happened so we turn to Rohingya media for some semblance of reality.

The men were being taken to court to testify in a criminal matter, the details of which have not been released. During a break in the trial the police escort took them to the Ywar Gyi Mrauk quarter of town a few kilometers away. Since under the terms of their persecution by the government Rohingya are restricted from entry to many areas including this neighborhood, it would be useful to know why police escorted them to a district where they would be endangered. For what purpose?

Buddhist nationalists spotted them as they got off the truck & despite the presence of seven or eight police escorts began shouting “the kalars are entering the city.” (Kalar is a racist term for Rohingya.) This drew a mob of Buddhist nationalists who attacked the Rohingya men with bricks, bats, & other weapons. They beat a 55-year-old man to death on the spot & sent two to the hospital in critical condition. The police, who presumably were armed, claim they were helpless before this attack & took off. What was to stop them from shooting off warning shots to the mob or shooting a few in the ass since they have never shown restraint in executing unarmed Rohingya?

The most repugnant aspect of NY Times coverage is their insistence on calling this “communal violence” rather than a systematic, government-orchestrated military campaign to ethnically cleanse the Rohingya. It’s not that rabid Buddhist nationalists have no culpability but that they are manipulated, cultivated, organized, & encouraged to participate in violence against Rohingya by the Burmese military & the Aung San Suu Kyi regime that fronts for it.

Why would the NY Times do this? Because their reporters are as stupid as their columnists like Nicholas Kristof, Thomas Friedman, & David Brooks? No, but because the NY Times is the voice of Wall Street & of US companies who have billions invested in the neoliberal economics which Myanmar is implementing. They do not want any sentimental concerns about human rights crimes by the regime against Rohingya Muslims & several other ethnic & religious groups to stand in the way of massive profits to be milked out of Myanmar. So that makes their appalling, lying-assed coverage nothing less than contemptible & criminal.

That also explains why Aung San Suu Kyi & the military junta refuse the UN investigation of human rights crimes against the Rohingya. You can bet your bottom dollar that US, European, Indian, Japanese, & Chinese companies with investments in Myanmar back that refusal one-hundred percent.

(Image of muzzled Suu Kyi from James Stencilowsky on Flickr)

“I am a Muslim, I respect all the religions,
But above all I am human being.
No human should be oppressed or killed for religious identity.
This world is a home for us and we are all members of same family.🌼💟🌼”

*the right to life, liberty and security of person;

*the right to freedom from torture or cruel or inhumane or degrading treatment or punishment;

*the right to freedom of movement and residence within the borders of each state;

*the right to freedom of thought, conscience and religion;

*the right to freedom of opinion and expression;

*the right to a standard of living adequate for the health and well-being of the person and their family, including food, clothing, housing, medical care and necessary social services;

*the right to education;

*respect for the unity of the family. 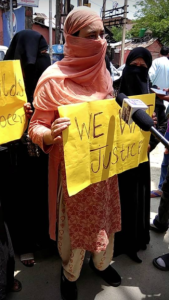 A vignette from the occupation of Kashmir:

This is the mother of a young college student named Mubashir, now being held in police custody in Srinagar; the protesters, including his family members, are demanding his immediate release.

While returning from night prayers during Ramadan, Mubashir was struck in the foot or leg with one of those so-called stray bullets the Indian army is so notorious for–the kind of “accidental hits” that have killed & injured so many children & other innocent Kashmiris in their homes or walking home from prayer, work, or school. He was taken to hospital for treatment & discharged but police then demanded his family bring him before them for questioning. They kept him in custody without charge since he has committed no crime & was not part of any protest when he was shot.

The family visited him in jail & report he has an infection in the bullet wound but that police are not allowing him to visit a doctor for treatment.

(This photo & report are by a FB friend who spoke to the protesters.)