Now isn’t this a reason to build the economic, cultural, & academic boycott of Israel (BDS)!? These little girls are taking ballet lessons at the Qattan Institute, an educational & cultural center in Gaza City.

One Zionist publication expressed alarm that young women in Gaza are being militarily trained–while US media has been boasting for three days that two women just completed military training with the Rangers, the special operations unit in the US army. The difference is Gaza is under military siege without any defense & no country in their right mind would attack the US because its anti-missile system is Israel’s Iron Dome system writ large.

Who wants children to grow up in a world of military fortresses & anti-missile systems? The creativity of children in music, art, poetry, dance is the future of humanity–not obstacle courses & weapons training. But meanwhile, Gaza is under military siege & young women want to participate in its defense so their children & younger sisters can dance.

The few media sources reporting on this conflict in Indonesia are terse in their descriptions: ‘residents of Kampung Pulo in Jakarta clash with riot cops after the city moved in to evict them from illegal dwellings in a flood-zone along the banks of the Ciliwung river.’ It sounds like the authorities are doing ungrateful slum-dwellers a favor by evicting them. Brevity is media shorthand for too many damn lies to count.

Most of the slum dwellers on the Ciliwung banks are migrant workers & rural people who came to Jakarta for work after being forcibly displaced by palm oil agribusiness firms, in collusion with the Indonesian government, using slash & burn methods of deforestation & land expropriation. According to human rights groups, there are an estimated 4,000 land-related conflicts between palm oil plantation owners & local communities & farmers. Indonesia is the largest producer of palm oil in the world. The deforestation & destruction of peatlands involved in the spread of plantations means it is also the world’s third largest emitter of greenhouse gases.

As an equatorial & tropical archipelago, Indonesia has annual monsoonal rains & much of Jakarta is below sea level so it has always been prone to flooding. But it is getting clobbered with the effects of climate change which are triggering annual major floods. Warmer seas heat up monsoon winds that carry moisture from ocean to land, bringing extra heavy rain & burying the capital city in up to 17 feet of flood water. According to the government environmental official, Indonesia could lose 2,000 islands by 2030 due to rising sea levels from climate change. The official admits heavy flooding is not only a climate phenomenon but due to waterways choked with debris (the case with the Ciliwung River), lack of adequate flood control systems, & the large-scale deforestation to build palm oil plantations & make room for a huge construction boom in Jakarta’s water catchment areas.

Indonesian authorities didn’t move 2,155 riot cops in to Kampung Pulo with tear gas & water cannons to save the residents from flooding & squalid conditions. Like in every other country where they’re forcibly evicting slum residents, it is to privatize the lands & gentrify with swanky malls, luxury apartments, casinos, & resorts. There are several development plans laid out for the banks of the Ciliwung River.

Negotiations have been going on for a while between authorities & Kampung Pulo residents. Only a few weeks ago, authorities made promises of alternative low-cost housing. Residents of the 546 dwellings wanted compensation instead of apartments. Today authorities say the dwellings were built illegally on public lands so they will be evicted & the homes demolished without compensation. There is of course no alternative housing for residents to move to.

The global demand for Indonesia’s natural resources made it profitable for foreign investors & fueled the rise of Indonesian fortunes from coal, palm oil, oil & gas. The fortunes of Indonesia’s 12 billionaires & countless millionaires are built on deforestation & plundering of resources so the regime is unlikely to alter the profitable ventures causing global warming, provide for a flood control infrastructure, or provide affordable housing to the hundreds of thousands displaced.

Photo is of confrontation today between residents & police. Three residents were injured in the confrontation & 27 were arrested, at last report. Our fullest solidarity with their struggle.

The vilifying of Black Lives Matters (BLM) continues despite reports it is under surveillance by the Department of Homeland Security. Disparaged by Sanders & Green Party supporters while they receive backhanded respect from a government that considers them potentially dangerous.

One may disagree with their disruptions & meetings with Democratic politicians like Sanders & Clinton but they are doing what several radical commentators, including Noam Chomsky, have recommended. Chomsky said he was glad Sanders was running because Sanders will push the Democratic Party (DP) to the left & be a “thorn in the side” to Clinton. Others have said Sanders will force the DP to take up issues of inequality & structural racism. Fat chance!

Truth of the matter is BLM activists are naive about the DP–just as naive as Chomsky & other radical commentators. That’s no reason to vilify them. There is no pushing the dead weight of the DP to the left. That’s a well-trodden strategy & the result has always been that those who took that route end up as cynics or hacks who lose their vision of social transformation & start making deals for sinecures & status. 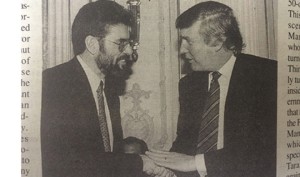 You can file this under “Who Knew!?” The 1995 photo of Gerry Adams & Donald Trump taken at a NYC fundraising event for Sinn Fein might explain something about the political degeneration of Adams in another case of laying down with dogs & getting up with fleas. Adams had been denied a visa to enter the US until 1994 when then president Bill Clinton approved him for a 48-hour visa. We should have seen it coming.

In the same article we learn that Trump is what he xenophobically & disparagingly calls “an anchor baby,” a child born to an immigrant & constitutionally considered a US citizen. His mother was Mary Anne MacLeod, a Scottish immigrant (in the turn of the century wave of immigration) from the Isle of Lewis off the west coast of Scotland.

(Photo from the Irish Voice)