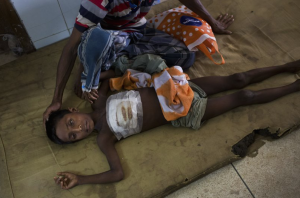 On October 2nd, a group of 20 diplomats visited Arakan state at the invitation of the Burmese government. The diplomats were from Australia, Canada, Czech Republic, Denmark, France, Indonesia, Italy, the Netherlands, New Zealand, Norway, Serbia, Switzerland, Turkey, the US, the European Union, Germany, Spain, Sweden, the UK, Finland. Just so we’re clear, they did not go there as private citizens but as representatives of their governments.

They issued a public statement that can only be called contemptible, blaming violence in Arakan on ARSA & which does not even mention the Rohingya people, let alone the genocide against them. The statement expresses solidarity with the Burmese military, placing those 20 governments in league with genocide & accomplices to it. No wonder not a one of them has sent even a thimbleful of humanitarian aid to help the 500,000 refugees. Those who are citizens of those countries cannot stand for this criminality but must incorporate demands for asylum & aid to Rohingya into all our political actions.

This photo is a Rohingya man with his 7-year-old son Shoabib who has a bullet wound in his chest from when Burmese soldiers attacked their village. That filthy old thing he’s laying on is a hospital bed in Cox’s Bazar, Bangladesh. The rest of the family members got separated from them as they fled for their lives. Those despicable politicians have deliberately turned their faces from the refugees & victims of genocide to side with the genocidaires of Burma.
We stand with the Rohingya people against genocide & against the monstrous, hateful lies against them. We demand our governments provide immediate & massive emergency aid to the refugees & back that up with asylum with rights to work, education, healthcare, & social services.

This is the shameful statement of the diplomats which will enrage as much as it sickens you: