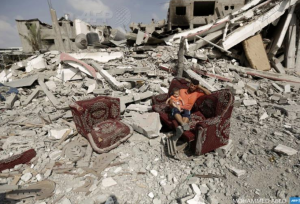 Apparently, some find my style of polemic overly-aggressive, obnoxious, even abusive. Such high praise & flattery isn’t necessary, but thank you anyway. This is something I wrote during the height of Israel’s 2014 carpet bombing siege of Gaza which directly targeted children & then brought out a deluge of apologists, including Elie Wiesel, who accused Palestinians of using their children as human shields. Would a kinder, gentler approach to such scurrilous crap have been more suitable?

This must be what Zionist apologists for ethnic cleansing mean when they claim Palestinians use their children as human shields. This man has no where to go with his small child since Israel is taking out homes, markets, mosques, hospitals, & UN refugee centers. There’s no place to go, no place to keep your children safe & where you aren’t a sitting duck. But hasbara is clinging to that human shield story because it is frantic to undo the damage of hundreds of photos of mangled & dismembered Palestinian children. Those wee martyrs have become Israel’s undoing. May they RIP.

Some witnessing this carnage are bereft that massive protests haven’t stopped Israel but if you think Israel & it’s allies aren’t sweating bullets about those protests, take a look at some of the war propaganda Zionist apologists are frantically barfing out. Some of it is completely indistinguishable from burlesque. Brigitte Gabriel, a shady, half-baked character, is the queen of farce in this regard. Gabriel, who has a couple names (probably from running from the law), is a hateful Islamophobe who claims she was used as a human shield by Palestinians in Lebanon. According to her, Palestinian fighters (in 1975-76) would park rocket launchers in front of each house, shoot off a cannon, & move on to the next house to make the evening news. You don’t have to be an artillery expert to recognize folly.

She’s a nasty piece of work too, claiming Palestinians “cannot win militarily against Israel so what they do is they use their own children as disposable collateral in order to win the war of public opinion against Israel.” She’s described by book venders as “fiercely articulate & passionately committed” when the pithy “unhinged” would be much more suitable. But when it comes to finding people to peddle this crap, beggars can’t be choosers. Hasbara takes what it can get.

This is the hay day of the Islamophobe who usually live isolated lives since even feral cats & mad dogs want nothing to do with them. A case in point would be witless, right-wing comedian Pat Condell, the UK’s own version of the contemptible Bill Maher. He posted a several-minute rant hating on Arabs who he calls “a bloody nuisance to human civilization.” Our man has no respect for anything except the sound of his own croaking. In denouncing Palestinians for using their kids as human shields he claims Hamas used child labor to build the tunnels between Gaza & Israel. Where did he get that information since Israel claims it didn’t know about those tunnels? Does our man have metaphysical sources of intelligence? Or like the rest of hasbara, does he simply make stuff up? It’s clear now why the mad dogs want no part of him, not even a ragged bone.

Hasbara thinks it really snagged a live one when they interveiwed retired Colonel Richard Kemp, the former commander of British troops in Afghanistan. To enlightened minds, not the best authority to address justice but again, beggars can’t be choosers. This interview is where you confirm crackpot Zionism has taken over the hasbara factory. He claims–contrary to IDF press releases–that Israel did not bomb a hospital & refugee center in Gaza; they were in fact bombed by misfired Hamas rockets. The rare (& entirely questionable) images of Hamas rocket damage in Israel are the size of potholes. Is our man actually claiming that one of those took out an entire hospital & a refugee center?

The only thing of value this military servant of neoliberal colonialism says is that the people of Britain have been deeply affected by the photographs of Palestinian children. To counter that, he claims Hamas falsifies these photos & includes images of Israeli children as dead Palestinian kids. His lies are even topping the state of Israel which has not claimed any deaths from Hamas except among the occupying soldiers.

This human shield story is obvious crap but it’s all Israel has got left. So this sorry-assed fool claims the high number of children killed in Gaza are because Hamas used them as human shields as a “key element of their strategy.” Listen to the jackass in his own words: “They want to lure & force Israel to kill civilians. And so you see images of dead babies, dead boys on the beach, women screaming about their children, & no reality can overcome those images. It’s understandable in a way, because it is heart-wrenching, I’ve seen firsthand what shrapnel can do to a baby, & it’s horrifying, & the problem is that there’s no reference, no open-mindedness to the fact that the only reason these children have been killed is because of Hamas’ aggression towards Israel.” The devil made them do it!

The most powerful way to answer this racist rubbish is to continue public protests denouncing Israeli ethnic cleansing in Gaza. The official lies aren’t stacking up, millions of people have seen the photos of small Palestinian children & know that something stinks in the state of Israel. It’s up to us to hammer home the truth & stand for justice.