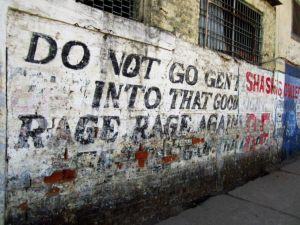 “Do not go gentle into that good night / Rage, rage against the dying of the light.”

This iconic line from the Dylan Thomas poem is written on the wall opposite the abandoned Union Carbide pesticide factory in Bhopal, India that in December 1984 released 27 tons of a toxic, deadly gas because of reckless safety procedures.

Over 500,000 people were exposed to the gas, over 25,000 have died from exposure to date, & over 150,000 survivors are chronically ill & in need of medical care, many with debilitating neurological disorders. The Indian & US courts have allowed Dow Corporation which now owns Union Carbide to walk away from this monstrous crime with complete impunity. Whilst Bhopal activists work out a strategy to force Dow to clean up the environmental damage & compensate victims, including with lifetime medical & other assistance, there is ongoing need to provide medical care.

You can learn more about the Bhopal gas incident & respond to the medical appeal at: http://www.bhopal.org.