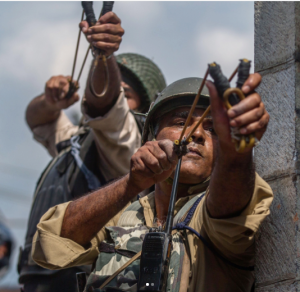 There have been reports for the past several months that Indian soldiers are introducing a new weapon: glass marbles catapulted by slingshots. They are not an alternative but in addition to pellet guns & are as lethal if a person is hit in the head or face where it can cause broken bones or blindness. They are less likely to penetrate internal organs than lead pellets but not less likely to maim, disfigure, or kill. It’s only a matter of time before they introduce methods for bombarding protesters with glass marbles from guns or other projectiles.

The paramilitary forces here are shooting at protesters in Srinagar with tear gas, pellets, & marbles after Friday prayers today when people gathered to defend their right to freedom of worship.

An Indian defense specialist has suggested the Indian army take lessons from the Israeli army by employing skunk spray dispersed through water cannons or hand-held canisters “to avoid the odium of using excessive force on stone-pelters.” Skunk spray which Israel has been using on Palestinians for several years smells like a combination of excrement, noxious gas & decomposing animals & the stench lingers for days on property & those persons sprayed with it. Actually, Indian officials are already debating the use of skunk spray not just in Kashmir but against protesters in India.

It’s a hard lesson to learn but if you do not stand with those your government oppresses, the same weapons will be used to suppress democracy at home.