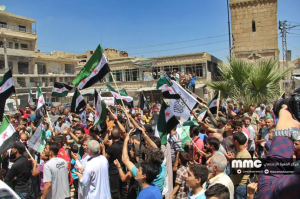 Demonstration yesterday against Assad dictatorship in region of Idlib: the revolution Assadists claim does not exist & which the antiwar movement, with utter political bankruptcy, approves of bombing to smithereens.

Such is politics today in the era of alternative facts & post-truth truthiness, where the left in indistinguishable from Fox News.

Long live the Syrian revolution. End the bombing of civilians in Syria. No US, Russian, Iranian, Saudi, Hezbollah, or other foreign military forces in Syria to buttress the Assad regime. Out now!